Krassi Jeliazkov is being overcomed by the guitar sounds ever since his early school age. At that time in his neighbourhood, several elder boys play and sing the songs of his favourite bands – Beatles, Led Zeppelin, Deep Purple, etc… They play the crazy melodies all day long along with friends. At the age of 13 he starts learning classic guitar with pedagogue from the town of Varna – Liubomir Haralampiev. Meanwhile he is interested in the development of rock and jazz music, up-to-date events and persons in this domain. At the age of 16 he studies jazz guitar and improvisation with the famous Bulgarian guitar player Alexander Petkov. He takes part in school bands and is playing improvisations on stage very often. The debut of his professional music career is back in 1975, when he plays in the Aram Berberyan’s orchestra – famous composer and conductor from Varna. This is when he hears for the first time the word “arrangement” and encounters the notes used for performing this genre.

What follows is evanescent performances with all kind of different bands, and his work with the politically orientated band – Valna /Wave/, which leaves particulary unforgettable and warm memories. The members of this band include a famous poet from Varna – Liubomir Levkov as well as one of the best bulgarian directors – Boiko Bogdanov. Together they create music for theater plays such as The life of Huakin Murieta, Edit Piaf, Dream in a summer night.

Krassi was admitted in the department of pop music at the National Music Academy “Pancho Vladigerov”, following a successful outcome on his professional life. He starts as a banjo player in the Ragtime band of a well known piano player Vladko Radulov. They have regular concerts each week in front of the university audience at the very popular at this time music club “Student 5″. 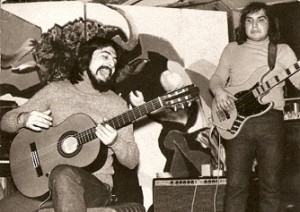 Inspired by the vanguard trends in jazz-rock, he founds his first jazz quartet “Montuno band”. The participants are – Valeri Milanovski – JOHN, also known as the guitar player from the latest formation of rock band “TANGRA”; the bass player – Dimitur Kovachev – The Funk, founder of the first Bulgarian music agency and promotion company Sofia Music Enterprises and perpetrator of the promotion of scores of concerts by the biggest names in the international show business; Stefan Purvanov – Kosuma, the very popular drummer of the LZ band. Montuno band is gathering speed pretty fast, as one of the most promising young bands of the day. They participate on every major event and festival in the country. Unfortunately, the struggle for survival eventually leads the musicians towards the road of commercialism and playing abroad on cruiser ships and live music clubs, hoping to get rich and buy the instruments they dream of, in order to gather together some day and “hammer” more of their favourite music… “Let’s live and we’ll see”, as the people say.

In 1984 KJ is attempting to go abroad and work with the “Port Band”. The failure in this initiative is marking the beginning of his work as banjo and guitar player in Swing Dixieland Gabrovo, conducted by one of the best arrangers and band leaders in Bulgaria – the piano player Manol Tsokov. With this band Krassi Jeliazkov participates at scores of festivals and concerts throughout the world, such as: The International Dixieland Parade Gabrovo /1984-86/, International Dresden Parade /1985-86/, Second Edition of the Traditional Jazz in Prague 1985, Grand Paris du Jazz 1986 and many more. In 1986 the Bulgarian label Balkanton produces an LP vinyl Folk Dixie, which includes everlasting jazz standards, as well as their own compositions and arrangements.

The beginning of Montuno 2 band starts in 1983 at the town of Varna. During the period 1983-1988 a lot of musicians participate in the band, and it exists in trio, quartet and quintet formats. The lead vocal for several years was Ivelina Balcheva, who was a very successful swing singer at the time and had a particular affinity for Ella Fitzgerald and Kamelia Todorova. Montuno 2 plays in the “The Wizard of Oz” along with the symphony orchestra of the Varna opera house, created by the following creative team: Rada Abrasheva – director, Margarita Gradechlieva – choreographer, Dimitur Traichev – scenography and Nelko Kolarov – conductor.

Their participation on all of the jazz forums in Bulgaria turns them in a most wanted band for many fans of this “riot style” music. During this period Montuno 2 could be heard and seen on many unusual places, such as exhibition openings, meetings of the painters organisation under the leadership of Stoimen Stoilov; on different events at the Golden Sands and Drujba resorts. The main organiser and patron of the events was their biggest friend and jazz fan, the painter Dimitur Traichev.

During the period 1983-1988 Montuno 2 becomes a main part in several different formations – Dixieland Varna and Big Band Varna, conducted by one of the best Bulgarian clarinet players – Dimitur Andreev. At the same time Krassi Jeliazkov forms a new band “Skool couple”, along with the saxophone player Evgeni Yotov, which successfully performs throughout Bulgaria. The two of them initiate a collaboration between Montuno 2 and the band PARALAX from the town of Rousse. For several years they play using the name either of the first or the second band, but the most precise name for this formation is ParaMont. There is a very funny story in the history of their collaboration – in the spring in 1988 the communist youth organisation sends the band to a jazz festival in the town Moscow – SSSR, but after their arrival it turns out that it is not a jazz, but a heavy metal festival. One of their concerts is in the hearth of Moscow along with 6 other heavy metal bands. Luckily it turns out a great success, and it all finishes with general drinking behind the stage along with the musicians from Moscow. A real soc reality…

1988-90 is a period of life instigations. KJ starts working in the orchestra of the Bulgarian National Circus, where he meets the great Serbian singer Jika Nikolic. For two years time they travels in Bulgaria, accomplishing more than 200 concerts in different cities and villages, venues and stadiums throughout the entire country. 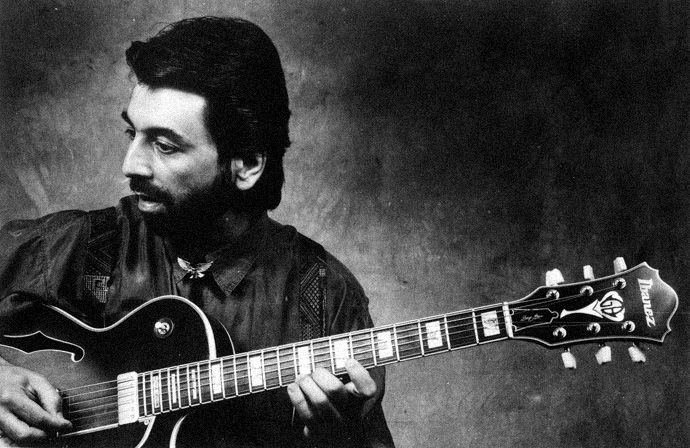 In 1993 KJ comes back to Bulgaria and is invited by Evgeni Yotov and Slavi Trifonov to start working with the “Cou-Cou band” for the recording of their first album, followed by a national tour attended by thousands of fans.
In 1994 he participates in the recording of gypsy romance songs, performed by Nikolai Liubenov, conducted by prof. Georgi Robev.

The collaboration between Krassi Jeliazkov and Evgeni Yotov continues for more than 10 years. They often play together as guest musicians in different formations, such as DK & The Blues Syndicate, Dimitrovgrad trio, Podium Band Varna, etc. In 1995 they establish the band Déjà vu. The participants are : Angel Zaberski-junior on piano, Evgeni Yotov – tenor and soprano sax, Venci Blagoev – trumpet and flugelhorn, Krassi Jeliazkov – guitar and band leader, Dimitur Shanov – bass guitar, Vasil Vutev – drums. For a short period of time the band becomes popular and has many gigs. The major economics crisis in the beginning of 1997 marks the end of this collaboration.

During the Sofia Jazz Fall festival in 1998 KJ forms a new formation including the best Bulgarian jazz musicians and guest musician Rick Delarata – americain singer and piano player. Their concerts in hall 1 of the National Palace of Culture and the live music club Mr. punch have been broadcasted by the Bulgarian National Television.

After several recapitulation years and thinking over the passed, Krassi feels some lack of satisfaction and emptiness, as he has attributed the past 20 years solely to jazz music. During this period of self perfection and learning he feels that there is no solid soil below his feet and the direction of growing up is beginning to fade. Step by step he concludes that there is one lack in his creation and playing process so far – the Bulgarian folklore and the ethno world music. For that reason in 1999 he initiates the creation of an international music project based on a modern ethno music root. On the 10th of November 2000 the Balkan Horses band is born.

At the beginning Krassi Jeliazkov was only producer and manager of the project, but the destiny later drags him to participate as a solo guitarist and tambour player in consequence. During the next 2 years Balkan Horses band performs on concerts in Macedonia, Serbia, Greece, Slovenia and Bulgaria. The concerts were sold out in advance and always finished with multiple on calls and endless applause. 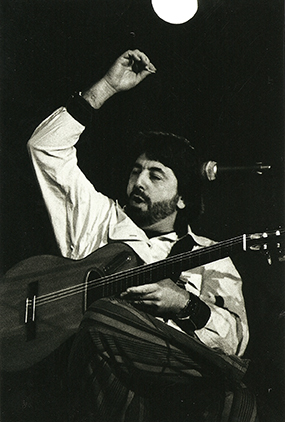 In 2000 Krassi Jeliazkov gathers together the musicians Funky and Kosama to play some music in memoriam of the beloved jazz critic and journalist Yordan Rupchev. Their performance in the assembled concert in the Bulgaria Hall, Sofia, was greatly appreciated and applauded by their friends and fans who love their temperament and music style.

In 2008 he is involved in organising and implementation of an international ethno project with the participation of Valya Balkanska and Cecilia Long – vocals , USA, Stoyan Royanov Ya-Ya – clarinet and vocals, Peter Yanev – Bulgarian bagpipe, Krassi Jeliazkov – acoustic guitar and Bulgarian tamboura, Plamen Mirchev – keyboard, Radoslav Slavchev – bass guitar, Rosen Vatev – drums. The premiere of the project ValCiЯ_Ya was held on 18.09 in the town of Kiustendil.

2009-20011 – together with the famous multi-instrumentalist NICOLAI IVANOV, creator of the popular ethno-jazz formation OM, they undertook again the idea of “Balkan Horses”. Their partners are Indian percussionist RAMESH SHOTHAM and Croatian violinist MARKO RAMLJAK. Because of the poor world economic environment they decided to continue their activity only with Bulgarian musicians. VLADIMIR VELICHKOV – kaval (shepherd’s pipe), NEVENA PETROVA – vocal, RADOSLAV SLAVCHEV – bass and EMIL PEHLIVANOV – drums, became new members of the “Bulgarian Horses 2”. They performed together numerous concerts at home and abroad. In 2011, they took part in one of the most famous music festivals in the world – Brosella Folk & Jazz – where they were warmly applauded by over 7000 Belgian admirers of good music. 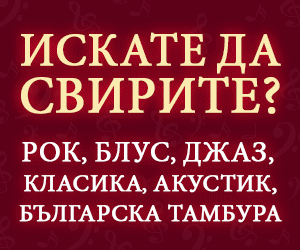